Over decades, the role of Japan in the Greater Mekong Subregion has been directly linked with the Southern Economic Corridor of the Mekong Region, marking the “Mekong-Japan Exchange Year” in 2019. Japan and Mekong Region co-exist as partners to offer mutual benefits, particularly in security and economic aspects. In Mekong Region, the role of Japan is prioritized into building human development resources, engineering infrastructure, soft infrastructure, and hard infrastructure for connectivity (ABS-CBN, 2015). That is to say, Japan closely sees infrastructure development programs as a part of security strategy. By giving the assistance for the infrastructure, Japan is trying to be one of the countries that build “Economic Interdependence”, a system by which many companies and nations are economically dependent upon each other, sharing and influencing values with Mekong Region on enhancing regional security. Moreover, Japan considers Greater Mekong Subregion as the region that has offered a solution of the needs for more green energy and labor for automobile companies as the middle class grows even for filling the shortage of labor (due to ageing population). Consequently, under Prime Minister Abe initiative, Mekong Region has been a major priority of development area for Japan.

Under the cooperation between Japan and Mekong Region, the keyword for Mekong development is the “revival of economic growth in the region” which established in one pillar of the Tokyo Strategy, called “connectivity”, an action plan under Japan – Mekong Cooperation Summit. Connectivity initiative aims to build infrastructure, trade agreements, as well as opportunities for economic revitalization. Furthermore, the transnational encounters between Japan and Mekong Region also bring other cooperation to enhance the connectivity. In 2016, Japan established an initiative called “Free and Open Indo – Pacific (FOIP)”, associated with The United States as FOIP is a vision to combine “Two Continents” and “Two Ocean” to create dynamism for stability and prosperity of the international community. On the Japan – Mekong Cooperation summit, Tokyo directed its partnership with Mekong Leaders on giving their support. Through FOIP, Japan wants to upgrade the relationship between two continents, including Asia and Africa as it was in one of pillar of Asia-Africa Growth Corridor. As such, the initiative conducts the connectivity starting from Myanmar, as representative of Mekong Region, India and other three African countries: Malawi, Zambia and Mozambique. On the other hand, FOIP is an acknowledgement of Japanese strategy for its alliance, Washington’s worries about China’s clout.

Reciprocally, for Japan, the cooperation provides a good opportunity to show its presence as a leader on rule-making and reinforcing freedom as well as maintaining peace and stability in Mekong Region. Therefore, according to Prime Minister Abe (LSE-SEAC, 2018), the connectivity and trade issue becomes a nexus between economic needs and security aspect. Moreover, infrastructure investment in Mekong Region clearly helped Japanese companies and government agencies to construct production networks on the basis of division of labor among different countries. Within the fiscal year 2019, Japan allows up to 48,000 foreign workers to enter the country, with up to 7,300 foreign workers are expected to work in agricultural sector and 5,000 each in the restaurants and nursing-care sectors. Many come from the Mekong countries, such as Myanmar, Vietnam and Cambodia. Regarding that, Mekong Region obtains benefit on human development due to Japan’s commitment. Japan gives opportunities to youth from Mekong Region in participating “Japan Exchanges Program” and proposal encouragement to establish the Mekong University by Myanmar since Tokyo Strategy 2015.

The East-West Corridor Project is measured as highly relevant, effective, efficient, and sustainable project, as reported by Asian Development Bank in 2019. In the point of relevancy,  the project interconnects national transport networks to generate trade and efficiency benefits as well as it was appropriate to support economic centers and to complement poverty reduction, particularly in rural area of Laos. Another point of effectiveness, the project was developed to simplify custom procedures aimed at strengthening bilateral trade and regional cooperation, especially in improving road transport efficiency between Dong Ha (Vietnam) and Kaysone Phomvihane (Laos). For the point of efficiency, the project was reducing a gap of economic internal rate of return between Vietnam and Laos, which Laos was 13 % and Vietnam at 16%, but it was equal at 16%. At the last point of sustainability, the project impacted significantly for local socioeconomic change, such as improved access to markets, employment opportunities and social services. The rural road component enhanced mobility among local communities and resettlement as well as environment were to be handled satisfactorily.

The project of Southern Economic Corridor was aimed to link Cambodia and Vietnam in order to serve the investment and create inclusive economic growth. Moreover, the project purposes to develop opportunity for the rapid growth of the urban population and the expansion of urban areas which can attract the investment and strengthen economic competiveness with an environmentally sustainable manner. On the other hand, in case of Cambodia, not only the infrastructure development is invested but also policy reform. The local authorities are to plan and manage policy reform on urban growth using integrated approach, operate and maintain urban environmental and economic infrastructure, and efficiently deliver municipal services under decentralization platform. As a result, this project is associated by ADB in line with Cambodia Country Partnership Strategy.

In summary, Japan and Mekong region have reciprocally shared common points of interest, especially in term of economy and security. They have the similar need on enhancing the economic growth although they have distinct background. For Japan, Mekong Region is able to solve the problem of labor shortage due to aging population in Japan, meanwhile for Mekong Region Japan is able to accelerate the economic growth and poverty reduction through connectivity initiatives on infrastructure investment and trade agreement mechanism. In broader term, for Japan, connectivity in Mekong Region is obviously a bridge to link multilateral agreement on security, particularly in South China Sea. Under FOIP among Japan, the United States, Asia and African, it brings benefits to both Japan and Mekong Region as the allies to promote and maintain peace and stability in the region.

Catching Up or Staying Ahead. Japanese Investment in the Mekong Region and the China Factor. (2018, May). IFRI. Retrieved from: https://www.ifri.org/en/publications/notes-de-lifri/asie-visions/catching-or-staying-ahead-japanese-investment-mekong-region?fbclid=IwAR1Jm0P3gf2tVyXpJQmgoJGslBMImrZXg6qxOkdWXNvIufMou1EDQiPTomY.

For Quality Growth of the Mekong Region. (2015, July 3). The Phnom Penh Post. Retrieved from:
https://m.phnompenhpost.com/opinion/quality-growth-mekong-region?fbclid=IwAR1555tq-fusHvMMVlS3Imw6KeQJY08fabJj3qsdY-Rxl2qw95Ys7NM-3Iw.

Japan, China and the Contest for Influence in Contemporary Asia. (2018, November 6). The Asia Pacific Foundation of Canada. Retrieved from: https://www.asiapacific.ca/blog/japan-china-and-contest-influence-contemporary-asia?fbclid=IwAR3pbwtCO-panLA9WeUPFKT5gNRcXfQ4WHNzfcNAOXgfihB0IqRrouE1zz2Be8 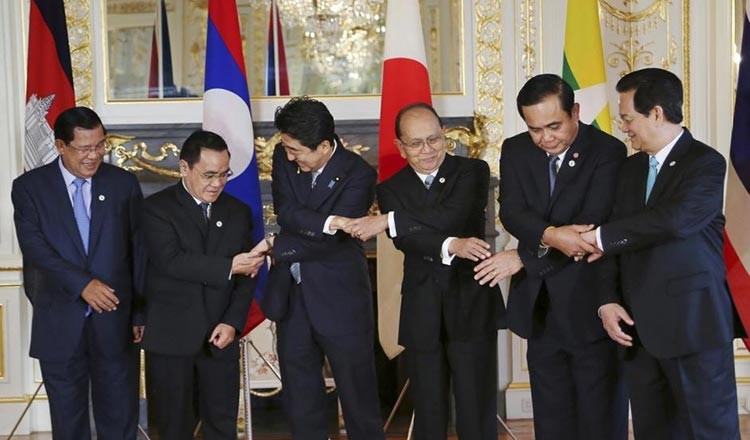